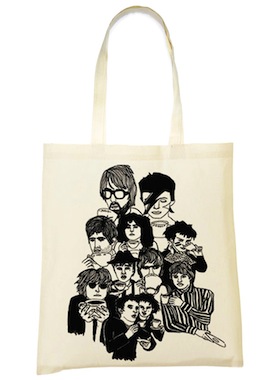 Some classic British rockers enjoying a typically British indulgence on this Under The Influence tote by emilythepemily.

Rather than sex or drugs, this illustration shows the likes of David Bowie, Marc Bolan and Johnny Rotten and Sid Vicious, alongside other musical stars, indulging in nothing more rock n roll than a cup of tea. It's a fun black and white illustration, with a great British sensibility.

Buy it from Totes Amazed

Acme Made Bowler – bowling-style bag for your camera