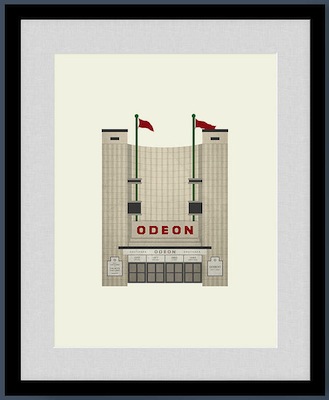 A great set of print for those interested in the golden era of cinema architecture, Paperhappy's Odeon Illustrated celebrates the traditional cinemas of Portsmouth and Southsea.

The series fondly remembers the time when there was once over 40 cinemas operating in the Portsmouth and Southsea area. They've picked out three Odeon cinemas which typify the era and have honoured them each with their own print.

Pictured is the print devoted to Southsea's former Odeon, which opened in 1937 and is notable for its dramatic Art Deco inspired architecture. Sadly the cinema closed in 1985 and has subsequently been demolished.

The giclee prints are available for £35 each or £90 will buy you the set of three.

Buy them from Not On The HIgh Street.