You can pick up vintage examples. Indeed, we have featured one as an eBay find in the past. But very soon, you'll be able to buy an all-new version of the Mini Moke too.

The car was originally designed as a lightweight off-road vehicle for the British military, although it was based loosely on the Mini mechanically. However, it got worldwide success as a fun vehicle from the mid-1960s and still has that reputation today.

That reputation should be enhanced by the updated model, which generally keep the same look and shape as the vintage mode, with just a few general cosmetic updates. The big difference is the engine, with the new version offered with either a modern four-cylinder engine or an electric motor for the more eco-minded.

The first batch will go on sale in Australia, before spreading worldwide after. There's an extensive gallery of the new car on the maker's website, as well as initial details of retailer of the vehicle. No pricing as yet (sadly), but we're hoping it can be priced low enough to be an option as a fun summer runaround. 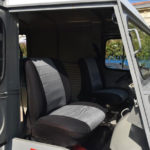