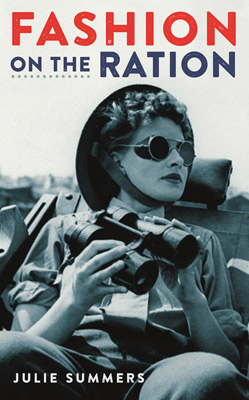 With that wartime look still a popular one (and having been for a couple of years now), it makes to produce a book all about it. That book is Fashion on the Ration: Style in the Second World War by Julie Summers.

This 240-page book tells the story of ordinary people from all walks of life and how they stayed looking good in incredibly difficult circumstances. It was an era when the country effectively went into uniform, with women taking on roles traditionally undertaken by men. As a result, clothing and beauty began to reflect changing social attitudes, with fashion influenced both by by Hollywood and high society but also by the demands of industrial production and the need to 'make-do-and-mend'.

Th book documents that in both images and words, highlighting an era in British fashion forgotten for years, but as we said, very much to the fore right now.

It is published by Profile Books and published at the start of March, selling for £14.88 on hardback.