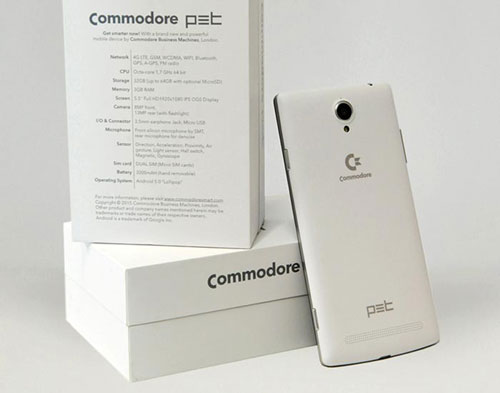 If you have fond gaming memories courtesy of the C64 and the Amiga, you are probably the kind of person targeted by the return of the Commodore and the Commodore PET smartphone.

Yes, the iconic gaming brand is back, but in a very modern way. There is a touch of retro thrown in though, more on that in a moment.

For now, let’s look at the Android phone, which uses the classic branding to sell itself, as well as a decent phone specification. You get a 1.7 GHz Mediatek 64-bit octa-core processor, a 3000 mAh battery, a 13-megapixel Sony camera (which can shoot 1080p HD video), an 8-megapixel front camera and 4G connectivity. There is also room for two SIM-cards too and you get a 5.5-inch IPS 1920×1080 pixel resolution display.

So where’s the retro? Well, outside of that design, you also get two pre-installed emulators to play C64 and Amiga games on your phone. For many, those will be the selling points here.

The phone will initially be available in the coming weeks in Italy, France, Poland and Germany with other countries to follow. Pricing is around £190 for the 16GB model or £230 for the 32GB phone.