With most if its standard range sporting a vintage / retro look, it’s hardly surprising that the Leica Sofort instant camera offers the same. In fact, more so.

This could be a camera straight out of the late ‘70s or 1980s in terms of looks and colour options. Throw in the fact that this is an instant camera and its retro credentials are complete. But it offers more than just a strong look.

On the front is a Hektor lens which extends from the camera and has three focus steps – Macro, Close and Far Range, depending on your distance away.

It also has Automatic, People and Party, Action and Sport, Bulb, Macro, Self-timer, Double exposure and Selfie shooting modes, control buttons and an LCD display on the rear and the option of a built-in flash. The battery should give you around 100 shots per charge.

Talking of photos, this uses the Instax Mini film, with Leica said to be offering its own variations of the film that will ‘reflect the nostalgic character of instant photograpy’. Like the sound of that.

Of course, this is Leica so it doesn’t come cheap. When it lands in November, the camera will sell for £215. 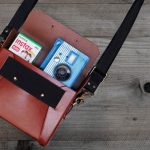