When you think Kodak you think cameras. But the brand is back with the Ektra smartphone, which does bring along a bit of the company’s photographic past.

This is named after the company’s 1941 rangefinder, with a look inspired by that era too. From the ‘leatherette’ side this could pass for a vintage camera, albeit a very slim one. It also has a curved grip and dedicated shutter button to complete the camera look and feel.

Once inside, you’ll also find a photo-friendly camera app with scene section dial, access to the Snapped photo editing app, as well as a Prints app if you need some ‘real’ photos.

Beyond that, this is a smartphone, one with a deca-core MediaTek Helio X20 processor., 3GB RAM, 32GB of internal storage, a 3000mAh battery, a 5-inch, 1080p display and the Android operating system.

and a mostly stock version of Android, save for the aforementioned Kodak apps. You’ll get 6.0 Marshmallow out of the box — no word on 7.0 Nougat, although Bullitt has promised to keep up with Google’s regular security updates.

It might well be available on contract, but right now, the Ektra is proposed as a SIM-free offering for £499. It lands in December. 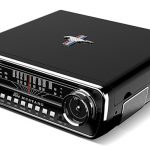