Similar designs have been on this site, but these are cement planters at Next and as such, are available on the high street.

That’s very much a selling point with these planters. They have a similar look to the competition, but are easier to obtain and if you happen to be near a Next store with a home department, you can also pop in for a closer look at them too.

Note that these are much cheaper than the midcentury-inspired planters at West Elm too. They are also cheaper than the those at La Redoute, which is also a plus. But ultimately price isn’t everything. It is all about the finish.

Those ‘rival’ models have coloured or patterned finishes and as such, they have their own appeal But the ones here got for a ‘cement’ finish. That’s a rather more basic finish, but with the popularity of brutalism right now, these Next planters could be right on the money when it comes to the pot. As for the wooden frame, that’s pretty consistent across all the pieces from the various makers and sellers.

If the Next planter is the one for you, then you will need to choose between the two different sizes here. It doesn’t come down to price though as both of those designs is priced the same. Each goes for £55. 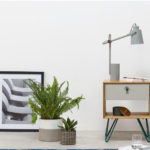 Dotty retro furniture range with hairpin legs at Made 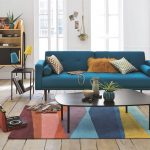