Every four years we have a World Cup and as a result, we get to see a new range of Fred Perry World Cup polo shirts. The latest selection has just hit the shelves.

Ok, when I say World Cup polo shirts, I don’t mean every country that has a presence at the event. Well, not as far as I know. That’s because Fred Perry doesn’t actually have them showing on its site as yet, so I am just going with what the one retailer I’ve seen them at has on its shelves.

So there might well be more than the ones shown here – if there are, I will add to the article as and when I see them.

But for now, let’s talk what is out there. The countries represented by Fred Perry so far are the ones pictured here, which are England, Germany, Brazil, Japan, Russia and Sweden. I know, one or two big names missing there, which is why I am wondering if there are other shirts due to appear.

As you might expect, each shirt is in the colours of the club concerned, with suitable colours for the tipping and a Fred Perry logo with the country’s name underneath. Outside of that, this is your typical Fred Perry polo with cotton pique construction and two-button collar.

If any of these shirts catch your eye, grab the quick as the more obvious nations tend to sell through pretty quickly. The price of each is £65.

Update: There is also a France Fred Perry shirt, pictured below, which is available at Stuarts of London. 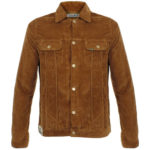