You might recall that I featured the vintage Admiral track tops by this company a while back. But today it seems appropriate to feature the archive England football shirts and clothing by 3 Retro too.

So much of it too. The company has produced a licensed range of England football shirt designs as well as track tops and clothing from the 1960s through to the 1990s. Whatever your era, there’s every chance that 3 Retro will have something for you.

Of course, the shirts are probably the most obvious thing to reproduce, but it’s the more unusual designs that caught my eye. The track tops from eras usually forgotten (like the less successful 1970s) and the national polo shirts and sweatshirts too. Yes, this is England kit, but not necessarily what the guy next to you in the pub is wearing. Which is obviously a good thing.

I’ll go through a few things above and below, but you can find everything at the 3 Retro website if you want to take in the full range.

Much more too. Check here for that full range. 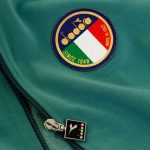