Fancy yourself as Steve McQueen? You could start by wearing the Tag Heuer Monaco 50th Anniversary Gulf Edition watch.

Yes, this is the watch Steve McQueen famously wore in the 1960s, but with a slight tweak to celebrate a particular event.

McQueen wore this in the Le Mans movie, as well as the Gulf colours, which are now a part of this classic timepiece.

That is because the latest issue of the Tag Heuer Monaco is a slight reworking to celebrate the 50th anniversary of Gulf’s first victory in the Le Mans endurance race. So more McQueen for your money.

The watch is an automatic steel device complete with a navy dial with blue and orange stripes, which is, of course, a reference to the livery of the winning Ford GT40. Also present are small second and 30-minute counting sub dials.

The automatic movement in the watch has a 40-hour power reserve, the dial stand out with Super-LumiNova indices and hands and it attaches to your wrist on a buckle-fastening blue calf leather strap. Love the matching box too. Not that you will be looking at that much. But on the days you don’t wear it, the Monaco looks impressive in it.

Obviously it doesn’t come cheap, although it comes a lot cheaper than the $800,000 someone paid for the original Steve McQueen watch at auction. The price is £4,750. 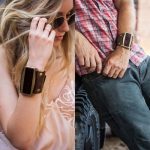 Lifeclock One: The Escape from New York Inspired Smartwatch is now a Kickstarter project