If you missed out on the one at Aldi a while back, you can always pick up the similar D&L Dansette-style record player with legs instead.

Ok, it isn’t exactly the same and it isn’t quite the same price point. But it is very similar and whilst costing more, it still come in under £100. With that in mind, this is a worthwhile alternative to check out.

Like a lot of the record players, the look is as much of a selling point as the record player itself. You could argue more so. After all, this is pitching itself as a Dansette alternative and Dansettes are rather hip right now, with prices for original players going through the roof. With that in mind, cheaper versions with a similar look will always be popular too.

However, this isn’t a record player for audiophiles. If you have a collection of very expensive vinyl, buy a record player they deserve. If you just like the occasional dabble in vinyl and don’t spend three figures on a single disc, this might be worth a look. Just don’t expect top end audio output.

What you can expect is a record player with three-speed playback, a 45rpm adapter, built-in stereo speakers, RCA output, a headphone socket, auxiliary input and a built-in Bluetooth receiver.

On the design front, this is essentially a ‘suitcase’ record player and has a carry handle for east of movement as well as removable legs, giving you the option of freestanding audio or using the record player on a sideboard, cabinet or even someone’s floor.

Update: It looks like this player is unavailable right now, but you can get the similar GPO Retro Dansette-style record player for £109.99. 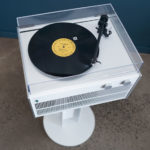