I have featured the real thing via eBay and modern-era copies too. But nothing as cheap as the Bauhn Dansette-style record player with legs at Aldi.

Yes, that’s right, budget supermarket Aldi is selling Dansette-style record players with legs. This player, from Bauhn, is available in two colour options, both of which have the ‘look’, that’s for sure.

They also play back vinyl at three speeds (33, 45 and 78rpm), with the player working via mains or a rechargeable battery. it also has those Aux In and line out, stereo speakers and the option of recording from LP to USB stick or SD card.

Of course, this isn’t going to be the best player out there for playing vinyl. I don’t think anyone is pretending that and if you are an audiophile or someone who invests a lot of money on rare vinyl, you probably need to have a think if you want to play it on this record player.

But not everyone is in that position. Some people spend less and some people might just spend money on secondhand vinyl in charity shops. Even today, there is still a lot out there worth buying and for next to nothing if you hunt around. The bottom line is that at just £59.99, the Bauhn player is ridiculously cheap and has the looks to match anything out there.

Note that these Aldi deals get snapped up quickly, so if you want one, act quickly or make sure you are at your local store when they land, which looks like next week.

Note that Aldi no longer have these (although they might well come back at some point), but you can buy them on eBay and there similar affordable options out there if you want something similar. Perhaps have a look at the GPO Retro Bermuda record player, the D&L record player with legs, the Crosley Dansette Junior record player or the Crosley Sterling record player. 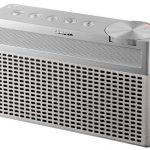