The shelf date isn’t quite confirmed, but we now have a first look at the Vans x David Bowie footwear range.

Yes, Bowie shoes, which is a concept you will either love or hate. If I’m honest, I’m not entirely sure what I think of this new range. As pieces of design, I quite like it. But for actual everyday wear? It might be a bit much – and I absolutely love Bowie.

Mind you, if you happen to be a collector and someone who picks up everything connected to Bowie, you might buy these regardless. If only to add to your vast collection.

You will have to budget big if you want them too, as there seems to be a number of styles to pick up. Looking at the images shown off so far by Vans, the footwear maker is giving the Bowie its Slip-On 47 V DX, Old Skool, Era, and Sk8-Hi, with album imagery from Space Oddity, Hunky Dory, Aladdin Sane and Diamond Dogs used for the imagery on each.

Yes, that’s right, early Bowie albums. Which does make you wonder whether this is an ongoing collaboration with the Bowie estate with later albums appearing further down the line? It might be, but there isn’t anything confirmed as yet. Surprised there isn’t a Ziggy Stardust design too.

What also isn’t clear is if the designs carry across each of the shoe styles or just apply to the one shoe. On the face of it, there are just the four pairs to pick up, which might come as a relief to any completists out there on a budget.

Update: The range, which also includes extras styles plus t-shirts, is now confirmed for launch on 4th April 2019. You can view the range and buy it at the End Clothing website. 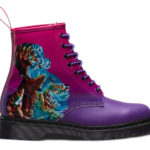