They were made for an Olympics, but the Adidas SL72 trainers are perhaps best known for appearing on the feet of a TV actor.

But yes, they were a shoe made for the Olympics and as you might have guessed from the name. The Sl72 was a sports shoe introduced to coincide with the 1972 Munich Olympics. It was followed up by similar shoes, which went by the name of the SL76 and the SL80 (which have also just been reissued) but the SL72 is the original.

It was designed as a lightweight shoe, making it a great option for the track. But like many Adidas shoes, it translated from the track to the street. In fact, the SL72 has been a regular reissue for many years. But not for a while. It has probably been eight or nine years since this was a regular fixture on the shelves, so good to see it back.

Great to see it back in blue too, as that’s the colour it made its name in on the small screen. As you might have guessed from the title, the shoe was worn by the Starsky half of crime-fighting crime duo Starsky and Hutch. A show that was hugely popular in the mid-to-late 1970s and is still an influential cult classic today.

While some people might have remembered Starsky for his cardigans, many remembered the classic SL72 on his feet too. And always in the blue you see here.

The design on the shelves now isn’t quite the same. Note the white detailing on the top, which isn’t present in the new version. Not much else has changed though, with a slim profile and narrow toe, along with nylon uppers, supportive suede overlays on the T-toe, heel, mudguard and eyelets, a streamlined EVA midsole and a rubber toe-bumper to prevent any scuffs to the suede toe panels and a serrated rubber outsole or grip. Just what you need when chasing a villain in Los Angeles.

They are back now and available in most sizes for £70.

Oh and note that his partner Hutch was more of a shoe and boot wearer, but he did occasionally wear a pair of Adidas Tobacco, should you be interested. 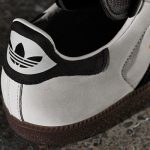