The first of the big Adidas reissues of 2020, the Adidas Amsterdam City Series trainers, which land this week.

The first and one of the most loved and sought-after too. This is a shoe worth staying up late for. And you will have to stay up late if you want to guarantee a pair in your size. This will be a sellout.

Perhaps that’s why the launch of this City Series classic has been rather low key and left until the last minute. There really is no point in building up excitement when the shoes will sell through regardless.

I’m guessing you already know about the revered City Series range by Adidas. But as a quick recap, they were a range of timeless Adidas silhouettes inspired by key cities around Europe. The range ran from the 1970s onwards, finishing almost 20 years later. The Amsterdam was a later addition to the collection, probably around 1990.

This is an archive release and as such, the Amsterdam has all the details you would hope for and expect. That obviously includes the chocolate brown suede upper, as well as some lighter brown detailing, serrated stripes and the classic Odenwald sole.

Also present are brown laces, the Amsterdam branding on the side and a leather lining. Have I sold them to you? Thought so. The hard part will be actually getting them in your size. But you can if you look hard enough,

In fact, all sizes are now available at Browns right now, retailing for £85. 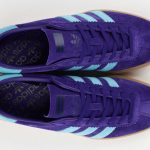