Not sure what I think of this idea, but this isn’t some kind of mockup. The Adidas Superstan trainers are very much a real thing.

In fact, the shoe you see here is already for sale and judging by reviews, is proving quite popular too. So maybe Adidas is onto something?

You can probably work out what the label has done. At first glance, this is the Adidas Stan Smith, a shoe that has been around since the 1960s, but in 1971 got the name Stan Smith after the acclaimed US tennis player, who at the time was number one in the world. Millions of this style have been sold. Over 30 million pairs since the change of name/endorsement.

Plenty of variations have hit the market too, but none quite like this one. You can see the white leather upper and three-stripe perforations of the Stan Smith, but you then see the Superstar’s signature shell toe cap and chunky rubber outsole.

Finishing it off is some new heel branding featuring that new name – and that’s about it. Thankfully, Stan and his name still like on via the tongue. Actually, Stan lives on in his own right as the original Stan Smith is still available to buy if you don’t buy into this hybrid shoe.

If you do, a pair can be picked up directly from Adidas right now, selling for £85. 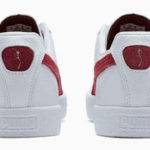