You could be forgiven for thinking City Series is an Adidas thing. But the 1950s Puma Oslo-City trainers proves it isn’t.

Puma was doing this thing long before Adidas and does occasionally bring its classics back. The thing with Puma is that those reissues tend to sneak out without the fanfare of the big Adidas releases. So it’s very easy to miss them.

The other issue is that the shoes don’t necessarily hit UK retailers either. This one is a case in point, only being available in German stores as far as I can see. But on the plus side, they do tend to ship internationally and it adds to the exclusivity of the shoes on your feet. Always a selling point. Although postage does get pushed pub a little.

Anyway, if you want a pair, I suspect you’ll not be too bothered about a little extra on the postage and if you love a classic trainer, you might well want a pair of these.

Amazingly the Oslo dates back as far as 1952 when it was produced to coincide with the 1952 Olympics in Norway. So almost 70 years old this one. Not that it looks particularly vintage.

This OG shoe has a premium white leather upper with ‘smooth’ black suede overlays and a gum outsole underneath. Perhaps that simplicity is why this shoe has aged so well. Finishing things off is the name of the shoe in gold on the side.

So, the price. if you want a pair of the Oslo reissue you are looking at €109.95, which is something like £98. Presumably a limited edition too, but not to the point of an immediate sellout thankfully. 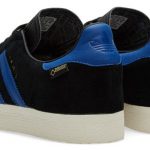