Looking for something different and obviously retro for your wrist? Maybe the LIP Mach 2000 chronograph watch is the timepiece for you.

Yes, a watch. Many people don’t bother with them these days. After all, there’s a clock on your phone, computer or tablet. And those who do have one want a gadget like an Apple Watch on their wrist. Not me. I still love a watch.

I know I can get the time by simply glancing up most of the time, but a watch isn’t just about keeping punctual. It’s about looking good and making a statement. Like anything else you wear.

I should do a round-up of my favourite retro watches as there are plenty out there, from a Timex Snoopy reissue to a Steve McQueen Tag Heuer Monaco. Something for everyone. And this one would make the cut too.

LIP watches were something of a 1970s statement, although they weren’t widely available to buy at the time. Unusual design with a touch of the ‘space age’ about them, they were the work of French industrial designer Roger Tallon, with the key designed noted for the coloured balls to the side.

Talking of popular, the pick of the bunch is the watch you see here, the LIP Mach 2000 chronograph watch. Yes, there are others, with a number being reissued in recent years. But the Mach 2000 is the one to have.

Available in various coloured cases, the watch tells the time in a fairly traditional manner (albeit with its own distinctive look) and with a calendar, water resistance, a Quartz movement and a stopwatch, controlled by those coloured balls.

There are variations on the theme too, with some of the detail toned down and some slimmed down too. The version in silver, for example, shows how the concept can be converted to more of a dress watch.

Interestingly, that version of the Mach 2000 is much cheaper at £169. If you want the standard version, that’s priced from around £350.

Find out more at the Time By Me website 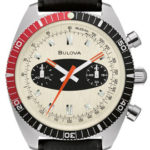 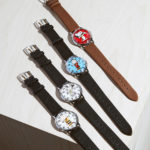