A little-known gem has got the reissue treatment almost 50 years after first appearing. The 1970s Adidas Cadet trainers.

The Adidas Cadet was first released back in 1974 and hasn’t been spotted for quite some years. To the point where you would imagine this one was strictly for the Adidas archive. But no, like a couple of other recent reissues from Adidas, this one has made a reappearance after several decades of being missing in action.

I don’t know why these gave appeared now and I’m not going to argue. Adidas mixing up its archive reissues and throwing in some obscure styles alongside the regular releases is a very good thing indeed.

There are two colours available. The classic is the white with red and blue detailing. But let’s not overlook the orange and deep red details of the other colour option too.

The shoe design itself is much the same whatever colour option you go for. A fairly minimal, streamlined shoe and the kind of thing Adidas did so well in the 1960s and early 1970s. Slim and stylish. A leather upper, suede toe, narrow gum sole, suede heel and the coloured stripes to the side. Cadet branding on the tongue too.

It’s a classic of its type and on the shelves right now. If you want a pair, you’ll have to part with £70. 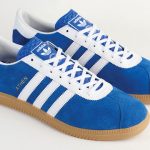