It has been available in various forms for some years now. But the Robin Day 1952 Reclining Chair Anniversary Edition is rather special.

This is a special edition of the Reclining Chair made by (and exclusively for) retailer TwentyTwentyOne. One of my favourite retailers, not least because they offer some wonderful design for the home, from small touches to bigger furnishings. They also produce some nice limited edition pieces too. Like this one.

Produced to celebrate the store’s anniversary and in collaboration with The Robin and Lucienne Day Foundation and Mourne Textiles, this is a new version of a chair that’s a British modernist classic.

It’s also only available for this year. If you buy one during 2021 you get this version of the chair, complete with a brass plaque screwed to the underside of the chair stating just that. Which should guarantee its value for many years to come if you look after it.

The original 1952 chair was produced by Hille and used mahogany armrests. However, after consulting the Robin and Lucienne Day Foundation, a sustainable alternative of American walnut was used here. Similar colour and grain, but a little better for the planet.

Outside of that, this is much the same as the 1950s chair. A reclining design (hence the name), it has armrests designed to hold a drink (but good for a phone or remote control in the modern era) and those skinny legs for support and style.

As for the upholstery, that is produced in association with Gerd Hay-Edie the founder and designer of Mourne Textiles and someone who worked with Day to produce upholstery fabrics and floor covering for his celebrated exhibitions at Milan Salone in the early 1950s. After that, Hay-Edie produced extensive collections of upholstery weaves for Hille for nearly three decades.

The weave used here is a ‘richly textured weave’ produced from the same source. It’s the attention to detail that makes it.

Not cheap at £2,450, but if you have a home and interior with a modernist or midcentury modern influence, this would fit right in and be a talking point too. 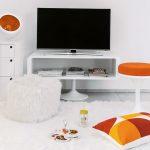