It has reappeared occasionally in its 50-year existence, but good to see the Adidas Stockholm City Series trainers return in original form.

I say original form because there have been variations on the theme in the past. You might well recall the Adidas Stockholm Gore-Tex trainers from a few years back. Shame there’s not a Gore-Tex version now in light of the current weather. But there is a classic take coming your way.

The Stockholm design is much-loved and a sought-after City Series shoe for a reason. This is peak Adidas in terms of shape and style. A few of the slightly more leftfield City Series designs have hung around for a while and even ended up in the sales. But this kind of design usually clears out in minutes.

With that in mind, I will put together a list of stockists for this one nearer the time. Yes, Adidas itself will have stock but you might have more luck picking up a pair at independent stockists, even if it is via some kind of online raffle.

Why should you want them? Well, just look at them. Classic and timeless City Series style that still looks the part decades after its 1972 launch.

That upper uses ‘buttery-soft suede’ and of course, the colours are a bold royal blue matched up with the yellow detailing for the stripes, heel, and tongue. Very nice on the eye.

Outside of that, things are nice and simple, with just a gum sole, ridged tongue, and classic Adidas sole to mention really. That’s part of the appeal.

And if the Stockholm does appeal, you’ll want to know all about getting some. Well, the launch is down as 11pm on Friday 26th November 2021 at the Adidas site, with variations likely at other retailers (but not far from that date and time).

As I said, I’ll list other retailers when things have been confirmed, whether that’s straight sales or one of the online raffles. There are likely to be quite a few of those. If you get lucky, expect to pay something in the region of £85 for a pair. 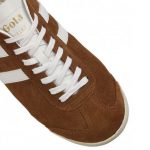