It might be for children, but the company seems to be trying to tempt adults in too right now. This is why I’ve put together my 10 of the best retro Playmobil toys and sets.

Some time back, I didn’t really ‘get’ Playmobil. The German toy dates back to the early 1970s, but never really touched my own childhood. But since having my own kids, everything has changed.

A chance present one year has led to something of an avalanche of Playmobil in the house. I just presumed it was a competitor to Lego, but my own kids treat it very differently. Yes, there is the initial build element, just like Lego. Although with the exception of a few tricky pieces that tend to be easier and much quicker than a medium-sized Lego set. But once it is made, from my own experience, Playmobil tends to be played with more.

I have two fairly young children and both create little worlds with their characters and vehicles, acting out their own scenarios over and over. It’s probably the best value I have had with any toys, even when I have dug deep for some of the houses.

But of late, Playmobil (not unlike Lego) seems to have gone after a new market. The adult market. Presumably knowing that nostalgia sells and noticing the popularity of displaying Lego models around the house, the company has been producing some fascinating designs of late. Many with reference points that will be completely lost on kids.

So with that in mind, I thought I would put together a top 10 of interesting retro designs. Note that like Lego, sets are discontinued, So if you want something, don’t expect it to be here forever. I’m gutted I missed out on the modern house (which you can see in this design round-up), but there are other interesting houses still available for children.

But for adults (and kids – my daughter has already asked for one of these for Christmas), there are some wonderful pieces on the shelves right now.

This has to be seen to be believed. A kids toy that every parent (or grandparent) will want too.

Not just a replica of the 1960s DB5, this set comes with authentic gadgets including the passenger ejector seat and revolving number plates which first appeared in Goldfinger back in 1964, as well as featuring Playmobil versions of James Bond, Auric Goldfinger, Oddjob and another of Goldfinger’s henchman.

Have a look at this one on the site to see all the images and how those gadgets work. If you love it as much as I do, you’ll need to find £69.99.

Buy it from the Playmobil site or from Amazon.

My daughter has no idea who or what the A-Team are. Yet this is on her Christmas list. As a price of fun for today’s kids, it works. But it comes into its own as a piece of 1980s nostalgia.

Yes, you get lovely recreations of Hannibal, B.A., Face and Murdock (although no cigar for Hannibal as you might have guessed), but you also get the fifth team member of the team, the super-cool A-Team Van.

Not just that, you get its extensive interior equipment with monitor, welding machine, operation boards, cabinet and perforated wall for various accessories. There are also roof inserts that can be removed for easier play as well as the option of opening the side door and tailgate.

Buy it from the Playmobil site.

Oh, this one is so pricey. But it’s also amazing in so many ways. if you love the original series Star Trek, you will want this.

A replica of the iconic spaceship. That would be enough for most fans. But the size of this thing will appeal too. 100cm from front to back. That offers plenty of space for detail – and this has detail.

The iconic bridge and engineering are there to explore, with or without the mini characters of Captain Kirk, Spock, Uhura, McCoy, Sulu, Scotty and Chekov. With them, you can recreate your favourite scenes, of course, courtesy of a removable roof.

You also get lighting effects and original sounds and dialogue from the show, which pretty much seals the deal. There’s an app for it too. Again, the picture above doesn’t do it justice, so see the retail pages for more.

And if you want to buy, make sure you have £449.99 spare. That’s the official price, although Amazon currently has it for £340.

Buy it from the Playmobil site or Amazon.

Love VW? Of course, you do. We all do. So you might want this amazing Volkswagen T1 Camping Bus in your life. Actually, you get to choose between two designs.

First off, the first and the original, which already sits in our house. An iconic design in an equally iconic shade of red. Great for play, great for just having on display.

As you can see, the V-shaped front end and VW logo, are in place, as is the rounded roof, split windshield and removable roof rack. An authentic interior within too, including a folding table with two seats, a sink with refrigerator, benches finished with a 1960s check, side doors and of course, happy campers and camping pieces.

Looking for a limited edition? Check out the blue version, which is just out with that new light blue finish, some cool chrome detailing, a furnished interior and surfboards, as well as some new campers.

Let’s stick to VW and look at another that’s currently heavily used in my home, the classic Volkswagen Beetle.

In a way, you could just reread what I’ve written about the bus. Well, apart from the detailing. It’s a classic VW and as such, likely to have appeal to young and old.

Again, a lovely reproduction and in that lovely shade of blue. Looking more closely, you get the curved bumpers, VW logo, the rear boot with a 4-cylinder boxer engine and as you would expect, all the internal detailing too. There’s also the family and everything they need for a holiday.

Want more? There’s a limited edition of this one too. The Volkswagen Beetle – Special Edition follows on from the special edition of the van with a new colour (yellow), chrome detailing, a new driver and new accessories.

6. Playmobil Back To The Future sets

That’s right, I am talking multiple, as Playmobil has gone big on Back To The Future of late.

I don’t need to explain the movie. It’s an evergreen cult classic series that you’ve likely encountered at some point in your life. If Marty Mcfly and Dr Emmett Brown mean something to you, then you can pick them up in miniature,

Of course, that means prices, but you can start your collection at around £6.99.

Buy it from the Playmobil site or via Amazon.

If you thought there was a lot of choice with Back To The Future, just wait until you see the options for Scooby-Doo! right now.

The evergreen cult cartoon has entertained kids for generations and to be honest, it’s probably as popular now as it has ever been. No Scrappy in the sets (which is no bad thing) but you can get replicas of all the other characters, along with the iconic Mystery Machine van.

Outside of that, it’s a case of picking up various add-on characters and scenarios. From limited-edition versions of Scooby himself through to Halloween specials and other ghostly settings.

Again, you are looking at different price points, with the cheapest starting at £4.99.

Buy it at Playmobil or at the Amazon website.

Another cult classic is paid tribute to in miniature. This time the Ghostbusters movie.

Much like the Back To The Future sets, this is pretty much the characters working alongside iconic backdrops from the 1984 movie. So if you want the Ghostbusters Ecto-1, the Slimer at the hot dog stand, the firehouse and of course, the Stay Puft Marshmallow Man. Or just get the main characters on their own.

Available once more from Playmobil or the Amazon site.

Sadly this isn’t one of the early versions of the classic 1960s sports car. But it isn’t the latest and there is still a retro feel about this take on the 911.

If you love a classic Porsche, this is likely to appeal. A take on the car that offers an option to take out the roof, space for two figures, light-up headlights, rear lights and dashboard light up (batteries not included) and a showroom comes with furniture, TV and accessories.

£29.99 seems a reasonable price at Playmobil but it is also available at Amazon, although it costs a little more there.

Fancy creating a midcentury modern pad? You could buy one or you could try and create something in miniature, using this house as a basis.

It’s not as impressive as the one I mentioned at the start of the article. But it isn’t far off. There’s still a strong 1960s modernist vibe going on here.

Want to build up that vibe more? You can get add-on furniture packs, with a few retro options as part of that selection too. So you can add in a funky retro vibe behind that exterior. Well, you or your kids can. This one is really aimed at the little ones. But there’s nothing stopping you from playing your part. You can see one of those packs above.

The house itself is available from Playmobil for £69.99 buy is also up on Amazon too.

You can get the modern living room pack featured for £9.99 from Playmobil as an exclusive.

That’s about it. If I see any others, I’ll add and update to the round-up to keep it current. 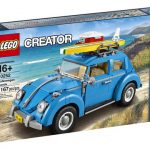