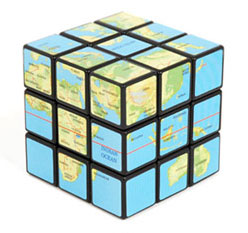 It’s been made to celebrate 25 years of the cube and replaces the plain coloured blocks with a sample map of the world. That makes things a lot harder – let’s be honest, one patch of land and sea on a map looks pretty much like any other.

As far as we know, this is only available from Japan, or via mail order from a Japanese online store (follow the link at the bottom for one such place). It retails for the equivalent of £10.

Find out more about the World Map Rubik’s Cube

Game On – the history of computer games