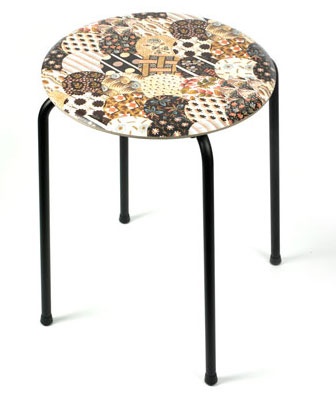 The V&A is currently hosting its Quilts 1700 – 2010 exhibition and as with most exhibitions, offering a selection of associated merchandise too. Which includes this rather smart limited edition Quilts stool.

The shape is very much early 20th century (think Alvar Aalto's Stool 60), with the design on the birch veneer top adapted from a patchwork coverlet of printed cotton and linen with appliqué and embroidery, dating from the early part of the 19th century. Just in case you were wondering.

That top is supported by metal legs and the whole thing is being sold as a limited edition, although it's not clear just how limited it is. Reasonably priced though at £50.