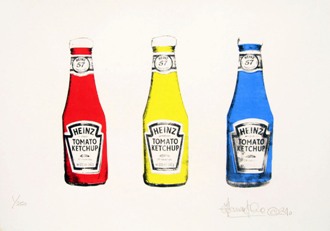 The Heinz ketchup bottle can be found in virtually very British kitchen – and now artist Francis Long has immortalised it in this "Infinite Variety" print.

This clever play on "57 Varieties" began life as a sculpture on the E17 Art Trail, an annual festival which sees Walthamstow artists and makers open their doors to exhibit their work. The three bottles contain the primary colours which are of course the basis for an infinite variety of colours.

The print is available from the E17 Art House as a limited edition, super-size screenprint costing £150. 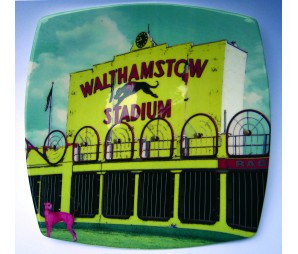 Walthamstow's famous dog racing track closed down in August last year to great sadness so the site could be redeveloped into housing. As well as being known for its racing, the stadium became known in its own right, being the location for much of the artwork of Blur's Parklife album amongst many other things. The stadium is commemorated in this dog track china plate by Alice Mara.

The stadium opened in 1933 and the digitally printed illustration shows the stadium's iconic Art Deco Grade II listed façade, as well as a lone, colourful greyhound. The plate costs £80.