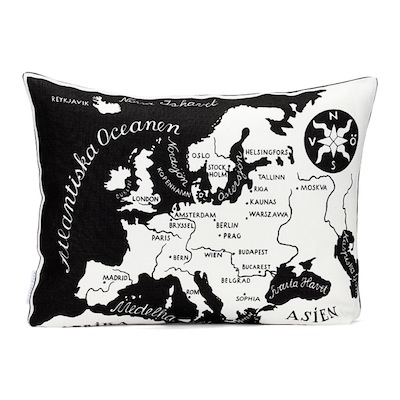 Here's something a little unusual for your home. A cushion featuring a world map designed by Josef Frank.

Frank was one of the founders of the Vienna School of Architecture before emigrating to Sweden in 1933 where he became one of the most prestigious designers in the company Svenskt Tenn. It's Svenskt Tenn who have produced this cushion, based on one of his design from 1939. With no borders between the countries, it's a reaction to the political situation at the time and the fact Frank had fled Nazism in Austria. Using simple black and white, the design is a striking statement.

The cushion is handprinted and costs 890 SEK, which works out to be roughly £80.