Skip to content
103shares
Note all articles are independently researched and written by myself. However, if you buy via one of the links it may be an affiliate and I may earn a small commission. 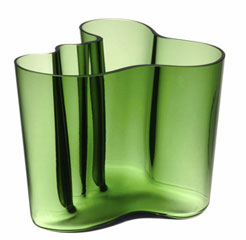 We have been featuring a few design classics recently, and this Savoy vase is one of the most iconic vases ever created. Designed by Alvar Aalto one of the founding fathers of organic design, the inspiration for the vase came from the shorelines of Finland’s fjords.

It was originally produced in 1937, and named after the Savoy restaurant in Aalto’s hometown of Helsinki. It is also know as the Aalto vase, and is probably the best know item produced by the designer.

The vases are still individually blown by the Finnish company Iittala, although the production has changed somewhat. The earliest models were made from re-cycled glass which gave them their greenish colour. They were blown round a wooden template which gave them an uneven texture. They are now produced round metal templates, which produce the smoother versions we know today.

Find out more on the Skandium site.