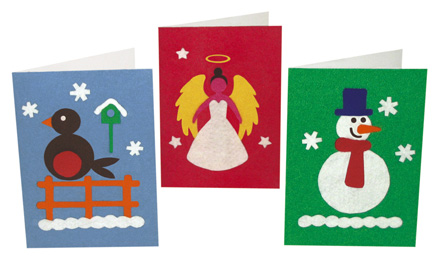 I love Fuzzy-Felt, as I remember one birthday getting about three sets of it from various friends. It was great fun moving the cut out animals and characters on the boards, and now it is back with Fuzzy-Felt cards.

Fuzzy-Felt was apparently first developed during World War II, when a group of homeworkers used to give the felt off-cuts from material being used to line gas masks to their children to keep them entertained. The best selling toy was originally launched way back in 1950, but I remember it as a 70s child. The cards produced by the Monster Factory have all the fun of the original sets, as you can re-arrange the pictures on the front to create a personalised look. The Christmas cards feature nativity, snowmen, presents and angels – and if you get bored on Christmas day you can amuse yourself by playing with them.

They cost £2.99 per card and are available at Paperchase, John Lewis and Selfridges.

Find out more on the Monster Factory site.