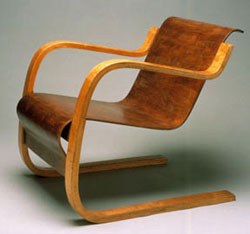 Finnish architect/designer Alvar Aalto is one of the leading lights of modernism – a fact that’s being recognised by London’s Barbican Gallery, which is hosting his first UK retrospective, curated by contemporary Japanese architect Shigeru Ban.

But Aalto is probably just as well known for his interiors, which are also featured. Items on display include his famous stacking stool and other furniture, as well as glassware, light fittings and textiles, many of which are still manufactured today by Artek. Also featured are works by the exhibition curator, heavily influenced by Aalto’s past work.