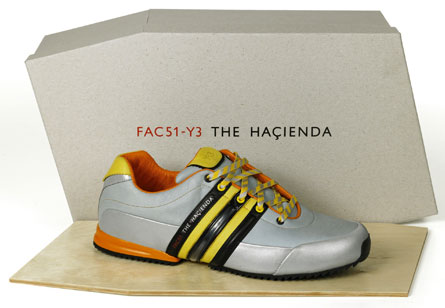 Feeling nostalgic for Manchester’s most famous club? Well, you can get that bit closer to the Hacienda with these Adidas/Y-3 FAC 51 Hacienda trainers, created to celebrate the club’s 25th anniversary. Doesn’t that make you feel old?

Y-3 is an Adidas design offshoot, with these shoes being the work of Factory graphic designer Peter Saville, Hac interior designer Ben Kelly and New Order’s Peter Hook. They’re sold in a six-sided, maple-bottomed box (reflecting the Hacienda’s dancefloor) and wrapped in four sheets of tissue paper – two featuring Kevin Cummins’ photography of the club, one with original design sketches of the interior and a fourth featuring the building today. There’s also a DVD thrown in featuring anecdotes of the club from those involved.

As for the shoes? Well, you can judge for yourselves from the image above. Not cheap at £345, but there’s only 250 pairs available from Y-3 Manchester and Selfridges in London, so a collector’s scrum is guaranteed.

Adidas Munchen trainers are a Size? exclusive reissue in blue