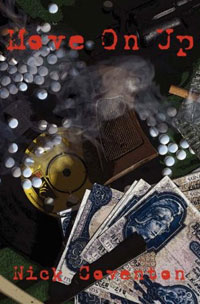 Pick up a retrospective novel about the 1960s and you could get a strong character-driven piece of fiction in the Jake Arnott mould or the other extreme – the literary equivalent of Heartbeat. Thankfully for us, Move On Up by Nick Coventon is very much the former.

Indeed, the Arnott comparison is appropriate, Move On Up also mixing London gangland with the youth cult of the day. But where this departs from the Long Firm is that ‘mod’ isn’t incidental, it’s central.

The book is essentially two converging tales. The first focuses on Johnny, an archetypal 60s mod who is big on self-belief and style, but low on income thanks to a dead-end job as a messenger in a non-descript import/export company. The second features Frank Saunders, able to live the good life thanks to a lucrative business as an armed robber. Johnny wants the life Frank has, but to get it, he needs to leave the ‘9 to 5’ and take a chance with something illegal. Drugs to be precise.

There’s also a third character looming large – and one that eventually brings the two stories together – London’s crime boss, Eddie Raven. Saunders’ abilities as an armed robber have got him noticed by Raven – and Raven wants a cut of the action. At the same time, Johnny’s plans to sell drugs to the clubbers of 60s London put him and his associates on a collision course with Raven, which nicely brings everything for a tense finale.

And it’s a very good read. There’s nothing new here in terms of content, Arnott might have caught the eye for this kind of novel in recent years, but even his books were just a modern take on crime fiction of that period (titles like James Barlow’s Burden Of Proof and Howard Baker’s Cellar Boys spring to mind). Yet the reason why Arnott got the sales is the same reason why Move On Up should shift a good few units – strong characters, a solid and interesting plotline with the occasional twist and an attention to detail that comes from a good personal knowledge or very good research.

The Johnny character sums up the 60s mod very well, with that attention to detail at the fore right from that the start – clothes, shoes, records and mannerisms – it gets the essence in the same way as Tony Parsons’ David Lazar character in Limelight Blues, which is praise indeed. Coventon’s ability to form a character is also evident with Saunders and Raven, not to mention the extensive number of well-formed ‘walk on’ parts in the tale. And there’s obviously a serious knowledge of some of the period’s main haunts and the capital’s streets.

Criticisms would probably include ‘chance’ being used just a little too often to get the plot out of trouble and as that plot progresses, we tend to get less of the characters – that emphasis on detail seems all too absent in the latter stages of the book. Some of the references to soul music seemed a bit shoehorned in too in my view, although others might well appreciate a few artists and tracks being dropped.

But those are minor criticisms of a book very worthy of your cash. Essentially, if you like Arnott, you’ll like this. And anyone looking for some mod-themed fiction will also find this a worthy purchase. Gangland violence meets 60s cool – what more do you want? I’m already looking forward to a follow-up.