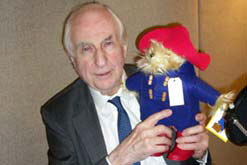 He might not look it, but Paddington Bear is 50 years old this week. And to celebrate, BBC Radio 4 is placing 50 Paddington Bears (like the one in this picture with creator Michael Bond) in prominent places in train stations around the UK wearing the label ‘Please Look After this Bear’. The bears will be in place and ready to be found from 9.30am on Tuesday 22nd January (which is tomorrow)

In exchange for taking the Paddington Bears home, the finders will be asked to call Radio 4 and leave a special birthday message about the bear. Which seems like a small price to pay.

And if you’re a fan, Radio 4 will have a special one-off programme on Saturday March 1st at 10:30am featuring the people who found the bears, as well as Michael Bond talking about his character and the first-ever owner of a Paddington – who happens to be Jeremy Clarkson (whose mother originally made the bears).

Find out more about the show at the Radio 4 website