Recently opened in the Parsons Green area of London, is a new bar-restaurant called The Establishment.

Whilst its food is described as “hearty British fare with a contemporary twist”, its décor is firmly rooted in the past, apparently taking its inspiration from classic British cop shows and 70s gangster films. What this translates to is a pretty stylish mixture of bold geometric print wallpaper by Wayne Hemmingway, Foscarini chandeliers and leather banquette seating that is supposed to be reminiscent of the seats in a Ford Cortina!

The Establishment also has its own dog (not sure about the hygiene issue here), a bull terrier called Buster whose portrait adorns the restaurant and the website. 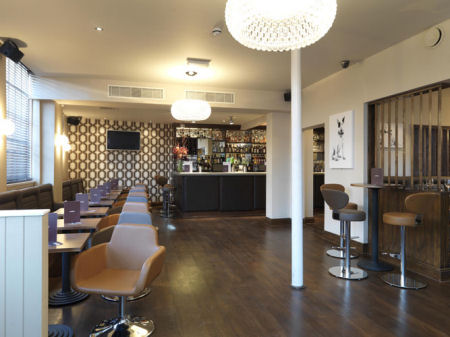 There is a wide selection of food on offer including separate bar, brunch and Sunday lunch menus. The cocktails also look pretty good with an emphasis on British gin-based concoctions.

The Establishment is at 45-47 Parson Green Lane, London SW6 4HH. Further information can be found at www.theestablishment.com.

And if you visit, do let us know what it’s like.