Skip to content
23shares
Note all articles are independently researched and written by myself. However, if you buy via one of the links it may be an affiliate and I may earn a small commission.

Not just about record players, the Crosley Everett midcentury modern media consoles are also available if you know where to look.

In short, these are not commonly found in the UK. You can find one of them and the others do ship to the UK fairly quickly. But it isn’t a case of just nipping down the high street if you want one of those.

The concept isn’t hugely different to the (very) popular Ronda vinyl cabinet at La Redoute, which is also part of the equally cool Ronda 1960s-style furniture range. But this is a one-off. Actually, it’s not a one-off, as there are four variations of it.

My personal favourite is the larger Everett in the lighter acorn finish. The lighter finish just seems to have more authenticity about it. But the design itself is no different to the mahogany version, which might fit your home better.

That design is a versatile media unit inspired by the mid-20th century, with a hinged top to fit a component turntable, storage behind the sliding doors (including custom record storage), metal detailing, tapered legs and plenty of space on top for a TV or just to use as a sideboard. Holes in the back for cables as well.

If space is at a premium, you could always shrink down in size (and price) and get the smaller unit, which is actually described as a record player stand.

Similar design, but with a smaller footprint. So you get the look, the vinyl storage space within and some space for a small record player on top. Perhaps that’s all you need. Again, you get to choose between the lighter and darker finish for the wood.

As for price and getting one, well you can get all of the units at the US version of the Amazon site and elsewhere, but getting them delivered outside the US isn’t easy. It looks like Crosley hasn’t bothered exporting this particular design.

You can get the media console via eBay for $291.99. Alternatively, all four variations of the design are available via US Amazon.

You can get the smaller unit in the UK via Fy, with the price at £277, which seems a bit heavy, although I guess that’s because it is being sent from overseas. 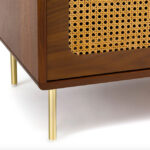 The Milly Chair at Swoon Editions