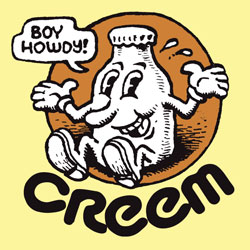 Cult artist/illustrator Robert Crumb was paid $50 for the Creem magazine logo. But you can pick up the Waterloo Creem t-shirt for around half that price.

If you didn’t know, Creem was a US music monthly, started in 1969 and credited with inventing the terms ‘punk rock’ and ‘heavy metal’, as well as giving early exposure to a host of legendary artists, bands and movements including The Stooges, MC5, Roxy Music, David Bowie, punk  and US college rock.

Now defunct – but you can show off your musical knowledge by wearing the t-shirt, available in three colourways as well as male/female sizes and available to pre-order now. It sells for $22.45 (around £12), with shipping from 31st March.