If you like the modern-day version of the Volkswagen Beetle (which I certainly do – in fact, I own one), you might be interested to know that Volkswagen is currently working on a new range of models.

According to the C4 Cars site, not one new model is being planned, but a few – likely to include a low-slung, two-seater roadster which might look like the Ragster concept above, an SUV-type Beetle (which just sounds plain wrong) and of course, a standard version.

All will be based mechanically on the VW Golf, with technical development in Germany, styling done in California and construction in Mexico. Expect a launch sometime around 2011. 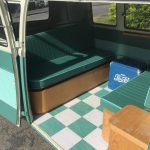 One thought on “Volkswagen developing new versions of VW Beetle”