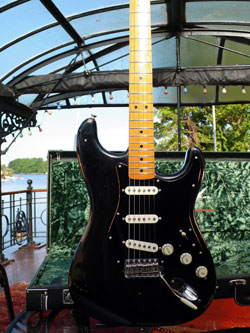 This ‘Signature Model’ is being issued by Fender on 22 September 2008, created by Fender and Gilmour and based on the one Gilmour bought in 1970 and used on albums including ‘The Dark Side of the Moon’, ‘Wish You Were Here’ and ‘The Wall’.

The ‘Black Strat’, which features the same maple neck, black pickguard, shortened tremolo arm and custom electronics as the original, will come with a custom black case with a centre pocket, plush green lining and ‘Fender Custom Shop David Gilmour Model’ embroidery, not to mention a book about the guitar, authentic strings, the same cable Gilmour uses, a deluxe Fender guitar strap and a ‘David Gilmour’ guitar plectrum. No price given – but don’t expect it to be cheap. 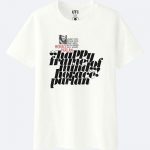 The Beatles and The Stones Exhibitions at Proud Galleries