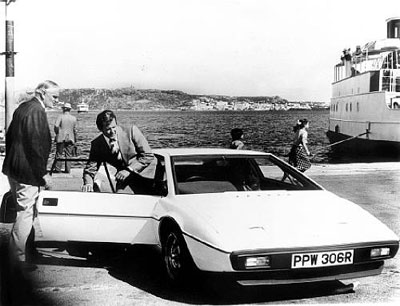 It’s one of the most famous screen cars of all time – and James Bond’s Lotus Esprit could be yours.

The car stole the show in the 1977 flick The Spy Who Loved Me, not only for its ability to speed around the Italian scenery, but for its ability to dive underwater and fire missiles. Sadly, you can’t do either of the last two (it was all special effects), but if you want to whizz about the country in a Roger Moore slacks and blazer outfit, this is the car for you.

The car itself was stripped of its movie extras (like the missile button and periscope screen), but was later painstakingly restored at great cost to the movie spec, all those buttons and gadgets going back where they belong. Check out the gallery for loads of images, then speak to your bank manager – it’s expected to sell for between £100,000 and £120,000 at the Olympia, London on 1st December 2008.

1970s space age cars up for sale at RM Auctions

De Lorean DMC-12 – bag a Back To The Future car