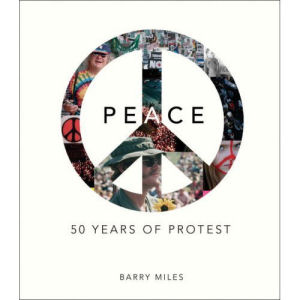 Telling the story of one of the most widely recognised symbols, the book follows the creation of the Peace sign in 1958 as a logo for the Campaign for Nuclear Disarmament onto its appropriation by various protest movements from the hippies in the Sixties, feminists and punks. The book provides a fascinating insight into the popular protest movements accompanied by a collection of photographs of the symbol in use by rock star, activists and politicians.

The book’s author Barry Miles has the right credentials for putting together this book, as he was at the forefront of many influential organisations in the Sixities, including chairman of the Youth Campaign for Nuclear Disarmament, co-founder of Indica Books and Gallery and International Times (IT) and head of Zapple, the Beatles’ spoken word label.

Peace is available to buy in hardback from Amazon for £17.50.