Patrick McGoohan has died after a short illness, aged 80.

He may be gone, but his work will live on – most notably as a super cool secret agent (working and retired) in the cult classics Danger Man and The Prisoner, but also in a host of British films including the likes of Hell Drivers, All Night Long and Life For Ruth to name just three. McGoohan was even considered for the original Bond role – a role he would have fit like a glove.

He left these shores amid the furore over The Prisoner, making a name for himself on TV, picking up two Emmy awards for the Columbo show and appearing regularly on both the big and small screen right up to the mid-90s. 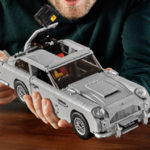