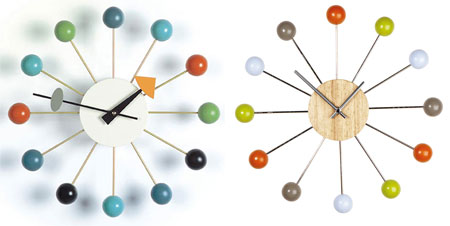 We've not done one of these for a while, but when we see two products so similar, it's hard to resist doing a comparison between the George Nelson Ball Clock (left) and the Matalan Molecule Clock (right).

Regular readers will know we have featured the Ball Clock previously, a mid-century classic from 1948, this distinctive design has been officially reissued by Vitra in a mix of lacquered wood and metal, with a high grade quartz clock keeping things ticking over. Expect to pay from around £143.

But now there's a pretender on the shelves. If we were being kind, we would say the Matalan Molecule Clock is 'inspired' by the Nelson original, although I suspect someone from Vitra may use stronger language. This particular clock is designed by Colin and Justin (yes, the camp design team from channel Five) and is just far enough away from the original to stay legal.

It's unlikely to have the same quality as the George Nelson reissue, but it does have one other thing in its favour – the price. The Molecule Clock will go on sale soon as part of the spring/summer range for just £20. You'll have to nip into a stire though, as Matalan don't sell their design online. 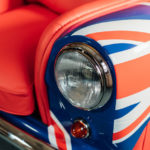 One thought on “Designer vs high street: George Nelson Ball Clock and the Matalan Molecule Clock”