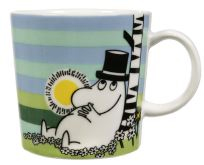 You will probably be familiar with the strange white creature who is shown here having a quick nap and who is otherwise known as a Moomin. Moomins were the creation of Finnish illustrator and writer Tove Jansson who featured them in several stories between 1945 and 1970. They now attract quite a cult following, hence this Siesta Moomin mug which is a limited edition for spring 2009.

Die hard Moomin fans are quite critical of the 1990s Japanese animation series Tales from Moomin Valley which they argued oversimplified both the original illustrations and stories. The illustration featured on this isn't by Jansson either but is by an illustrator called Tove Slotte-Elevant, who has managed to capture something of the spirit of the original drawings. This small piece of Moomin magic costs £19.95.
Buy it from the Design Shop UK website

One thought on “Siesta Moomin mug”