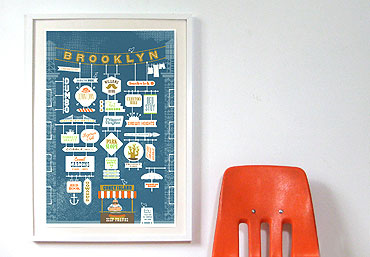 The website Three Potato Four have teamed up with designer Jim Datz to produce a series of City posters, which combine vintage typography and 1950s style illustrations.

The Brooklyn Poster is the second in this series and is available as a first edition of 200 prints, each signed by the artist. The first design featured Manhattan, and that is still available, but is now in its second print run which is slightly less exclusive at 500 copies.

The posters cost $48 (around £30) and can be ordered from Three Potato Four.