Mr Potato Head enjoyed something of a comeback following the Toy Story films, but the toy was popular throughout the 70s and 80s, with the original idea dating back to the Fifties. And now he his image has been put to use again on these Mr Potato Head Mugs by Pearl and Earl.

The mugs are part of their series depicting iconic images against block colour backgrounds. Mr Potato Head, drawn in white, is depicted as having lost one of ears.  They are are available in a choice of red, turquoise or brown, so you can mix and match.

The mug is made from fine china, is dishwasher safe and costs £8. You can buy them online from the Pearl and Earl website. 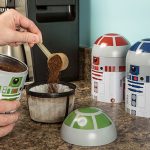