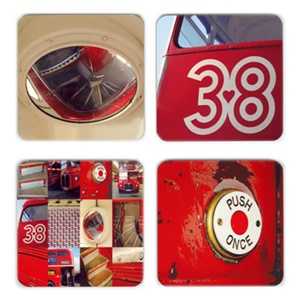 Though decommissioned in 2005, the Routemaster remains one an iconic symbol of London. Transport for London have recognised this and asked Ella Doran to create a range of products around the bus, including this set of four Routemaster coasters.

For those who travelled on the bus, the images of the bell and the mirror featured on two of the coasters will be familiar sites and the third shows a close-up of the old logo of route 38, illustratrating why it was known as the 'love bus'. The last coaster features a montage of all these shots with several others. Transport enthusiasts may be pleased to hear that, at £13.70 for the set, they cost 10p less than a current weekly London bus pass.

Petal Coffee Table from Made