You may remember Maria Holmer Dahlgren's colourful pop art style tray from last year. Well, she's back with a new tray design that also uses London as its inspiration, this time depicted in stylish monochrome.

It features many of the same elements: architectural landmarks such as Tate Modern and Tower Bridge and some quirkier pieces, like the umbrella raining cats and dogs. There are some new bits too: the 'L' of London, for example, is now charmingly doubles as the Big Ben tower.

Buy it from Scandi Living

Amode space age Sputnik light for the wall or ceiling 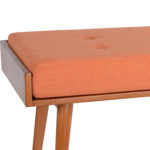