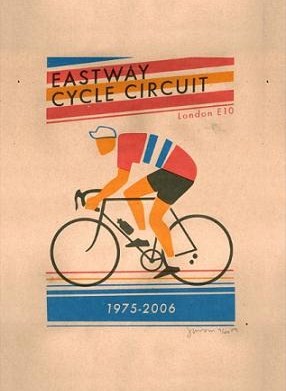 This striking image is a tribute to the now closed Eastway cycle circuit in east London which was moved for the development of the Olympic Park. Artist James Brown was apparently influenced by an image he saw on a 1963 Czech matchbox but the simple outline of the cyclist and the bold colours used also make it reminiscent of sporting posters and logos from around 1975, the year the Eastway opened.

The image is silkscreen printed onto brown board. It's a limited edition of 100 and, at time of writing, there only seems to be a few left. If you want it then, you'd better get on your bike…

The print costs £58 from Boxbird

A to Z with added cool: Alphabet print by Anil Mistry