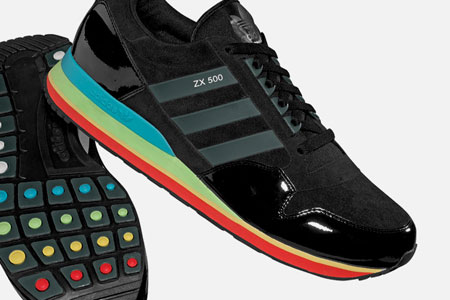 Interesting sales pitch from Adidas, reissuing the mid-80s ZX 500 running shoes and sweetening the deal further with an exclusive Adidas computer game that could have come from the same era.

But let's look at the footwear first, a variation on what's described as a 'bio-mechanically correct, high mileage running shoe', complete with rubber outsole studs that grip soft ground, but 'retreat' for harder surfaces. Those studs get a colour makeover too, as does the cushioned sole, in contrast to the predominantly black upper. Oh yes – there's that game too.

The shoes are part of the new adi Game collection, with a game packaged in each box on a USB stick. This one is called ZX Runner, an 80s-style platformer where you take on the role of DJ Zed, rushing through town to make his late night DJ set. You've got 5 minutes to make it – and you'll need everything from rooftop stunts to moonwalking to get there.

Check out the YouTube clip for an idea of what to expect and if the package appeals, you can buy it while stocks last for £75.