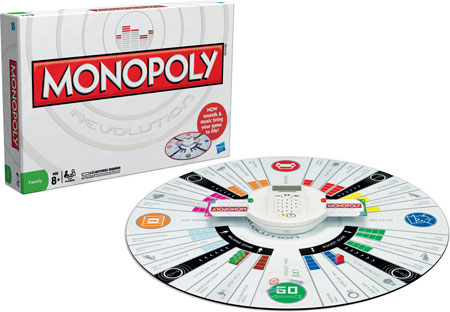 It's been around for the best part of 75 years, which probably gives Monopoly classic status. But in that time, the look and feel of the game hasn't changed a great deal – until the arrival of Monopoly Revolution.

You know what? We quite like it – it's the Monopoly you would expect to see in Space 1999, making it a perfect addition to any space age-style home. Gameplay is much the same, but now it takes place on a round, rather than a square board. But the real difference is with the money. No longer a handful of paper notes, the cash is dealt with via that central unit and some banking cards. Prices are different too, more in line with real values. Which makes the whole thing more 'high stakes'. A few sound effects and some suitable music are also included, for better or worse.

Look out for in time for this coming Christmas, priced a little up than the original, but not a great deal.